People are hyped about the metaverse, and it’s honestly understandable. First, we’re going through some shit as a species right now. Social tension,.. 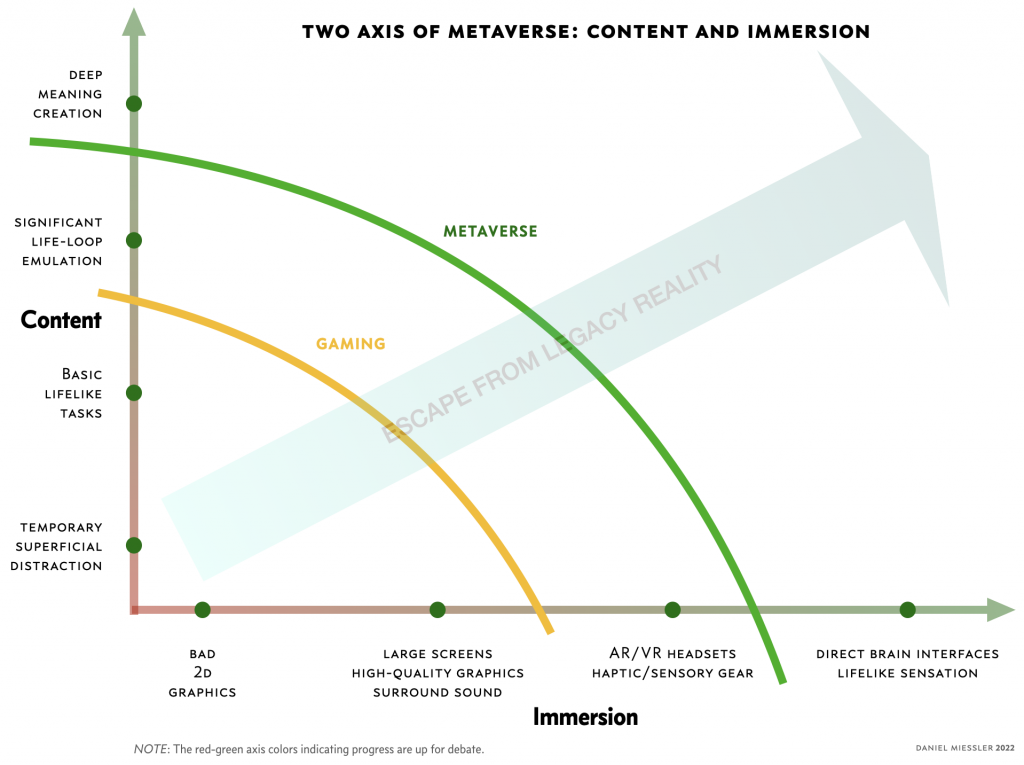 People are hyped about the metaverse, and it’s honestly understandable. First, we’re going through some shit as a species right now. Social tension, the best part of Star Wars’ last three movies were the previews, and there’s a global pandemic. Part of this metaverse hype is just being excited to be excited, and I get it.

Metaverse lore has lots of fun stuff in it—from AR/VR to headsets to avatars to moving between worlds. But I think we can reduce the metaverse to one concept and two axes.

Content is life. It’s the source of meaning. It’s what gives provides us with evolution’s nectar of happiness in the form of hormone releases when we struggle and achieve something.

Throughout history we’ve had this naturally. Survival was hard. Mating was hard. Everything was hard. So you were rewarded by evolution with a squirt of happiness if you just survived.

But then you had to reproduce as well, and if you were able to find someone and make some babies, more squirts for you. You’re not dead, and you’ve passed on some genes. Evolution is happy with you, and you die a relatively happy person.

Then modernity comes and fucks everything up by making everything easy. There’s no faster way to create depression than to remove struggle and attainment.

With automation and AI, more and more humans are becoming what Yuval Harari calls the Useless Class. It’s not meant to be harsh. It just means there will soon be billions of poeple who can’t do anything better than a machine can do, and that’s a problem in our current society.

People need Life Loops that provide meaning. Their own version of rolling the boulder up the hill. And there’s a lot of research that shows that addiction isn’t a drug problem as much as it’s a lack of connection problem. A lack of meaningful Life Loops.

In short, if meatspace content sucks, people will look for alternative content. And that’s what gaming is to millions upon millions of people.

The content matters, though. People probably don’t lose as many marriages to Tetris as World of Warcraft, and that’s because of the attraction factor of the Life Loops that are offered.

Tetris has a loop of sorts. But it’s very short, and very shallow. It’s not overly life-like. It’s more like meditation or knitting.

World of Warcraft—and other games like it—have many aspects of real-life that people enjoy, and thus it’s easy for the brain (and evolution) to get confused about which life its supposed to reward with a squirt of happiness.

What’s more meaningful: your kid getting an A- in science, or you getting a new piece of epic gear and a promotion within your guild?

As I’ve said before, having alternate life loops can be problematic.

If you have no worthy struggles in your life, or no capability to rising up and achieving in the face of those struggles, you might opt for a place where you can grind and achieve.

Fortunately, it’s pretty easy to see what it’ll look like. All we have to do is look at the best and most popular books, manga, and movies.

You get bullied some. You have some bad times. But you develop a special gift. Most people don’t know you have it, but it comes out some times, and you hide it from everyone. Except maybe your best friend.

And there’s a love interest. Or a dark potential lover that’s unattainable and dangerous, but who’s somehow taken an interest in you. Or a threat arises that only you can face, using these new powers, that very few people know you have.

But here’s the thing: it’s not the same experience, playing this game, for you and for someone else. No. All the characters are different. They look different. Different voices. Different quirks. Both good guys and bad guys and extras. Even the plot changes from player to player and instance vs. instance. That’s the power of AI.

Watch Total Recall if you haven’t.

So, what we’ll have is deep and meaningful games, largely generated by AI, with tons of customization and tweaking options, that could take weeks or months—or even years—to develop and climax.

So in meatspace you work at the Amazon factory training Bingo the robot how to do your box-stacking job, but you don’t care because in reality you’re Tristian the Bastard Sword Weilding Slayer of Dragons. And you have a deep mission to defend a town that you’ve spent years protecting and growing and nurturing. Plus a woman you’re in love with, who is technically an AI but you don’t even care anymore.

That’s Content. This is not fiction, this is inevitability. This is where all gaming is going.

This is true not only because it’ll develop naturally as an evolution of gaming, but because governments will realize the only way to pacify billions of people is by providing them a Life Loop that doesn’t involve revolution. So the militaries around the world will pay the gaming companies to make better and better stuff.

Now let’s talk about the interface into these worlds. With Pong, or Tetris, or whatever Gen-1 game, it was barely even life-like. But it was enough to pretend with an active imagination.

As we move ahead a few decades, we can now sit in a wonderful chair, look at life-like and beautiful graphics on giant displays, and hear everything in sound from every angle.

Join the Unsupervised Learning Community
I read 20+ hours a week and send the best stuff to ~50,000 people every Monday morning.

We saw this in Ready Player One, and we see some of it already in current AR/VR games like Beat Saber. The better the interfaces get, the more realistic all those interactions will be, with you actually doing them—either with your body or your brain.

The next level of this will be what we already know is coming from multiple companies. Meta. Apple. MagicLeap. All these companies are supposedly working on headsets that will make these gaming experiences more realistic. And that means from a visual and sound perspective, but also from an action perspective.

The endgame there is what Elon is working on with Neuralink. Who knows if he’ll land it or not, but we do know it’ll eventually land. And that’s the ultimate interface because then there’s no difference at all between thinking about doing it and doing it.

Thought becomes the action. And that action gets translated in both directions back to the brain and back to the game. That means you get to feel pain, and anger, and lust, and sex, and fighting, and jumping out of a plane, and all the different things you can do in meatspace. But better.

Maybe there will be a whole set of intermediary steps between headsets and brain interfaces, like the sensory suits we see in lots of films, but I think we might just skip those. There’s a chance we’ll just move from better and better headsets, skip the suits, and go right to brain interfaces.

However we get there, and however fast, our inevitable motion as a species is upwards and to the right on this graphic.

The content will be highly randomized, highly customized just for the player, and so meaningfully deep and rewarding that it’ll be better than anything you can imagine in life. It’s hard to compete with being Superman and saving the world and winning the girl, over the course of multiple years of deeply meaningful game time.

It’ll be even more engaging when it’s beamed right into your brain.

It’s especially hard to do that when it was all experienced through a headset you can wear for 12-hours straight, and that projects a visual and sound field that feels nearly realistic, and which allows you to move and jump and kick and thrust (swords, settle down) like real life. When you get done with a 10-hour session and you’re sore and sweaty, that’s going to be a boon for human health. Physical at least.

Despite what Pinker says, life is getting harder for humans, not easier. Or said another way, it’s getting easier which is making it unbearable.

As normal people continue to be crushed by the banality of meatspace, stripped of opportunities for worthwhile struggle and attainment, more and more of them will abandon it for something better.

There are now over 3 billion active gamers in the world.

Gaming is not fundamentally different than the metaverse; it’s just less-evolved in content and interface. It’s just an earlier version.