Under the Hood: Microsoft's M12 Venture arm continues to evolve as it accelerates investment pace

From the outside, M12’s mission likely seems simple to most: Invest money from the second-most valuable technology company in the world, put its.. 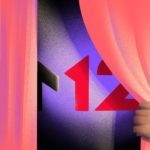 From the outside, M12’s mission likely seems simple to most: Invest money from the second-most valuable technology company in the world, put its monstrous go-to-market machine behind said investment, and then create a unicorn.

In reality, Microsoft’s venture arm must navigate complexities and obstacles not seen by traditional venture firms—and even many corporate venture arms—as it looks to drive returns back to the Redmond, Washington-based tech giant. At the same time, M12 must build the vast ecosystem Microsoft plays in, such as cloud, AI, business applications, infrastructure, security and deep technologies, and support the entrepreneurs it invests in.

“Over the past five years, M12 has established the expertise, playbook and growth engine to meaningfully accelerate the success of our portfolio companies,” said Michelle Gonzalez, corporate vice president and global head of M12. “We have a unique opportunity to support startups with global ambitions through Microsoft’s scale.”

M12 invests from a single fund that is replenished by Microsoft—the fund’s sole limited partner—off the company’s balance sheet. M12 does not release any details on how much it has invested since being founded in 2016 or the size of the fund currently, but just as the venture world has grown in the last five years, M12 also has increased the size and speed at which it makes investments, according to Crunchbase data.

In 2016, M12 made 15 investments in its first year as a fund, according to Crunchbase data. Last year, it made a record-high number of 55 investments and is on pace to beat that number this year already having made 39 investments through the first eight months of 2021. Overall, M12 has invested in 107 companies since its inception. 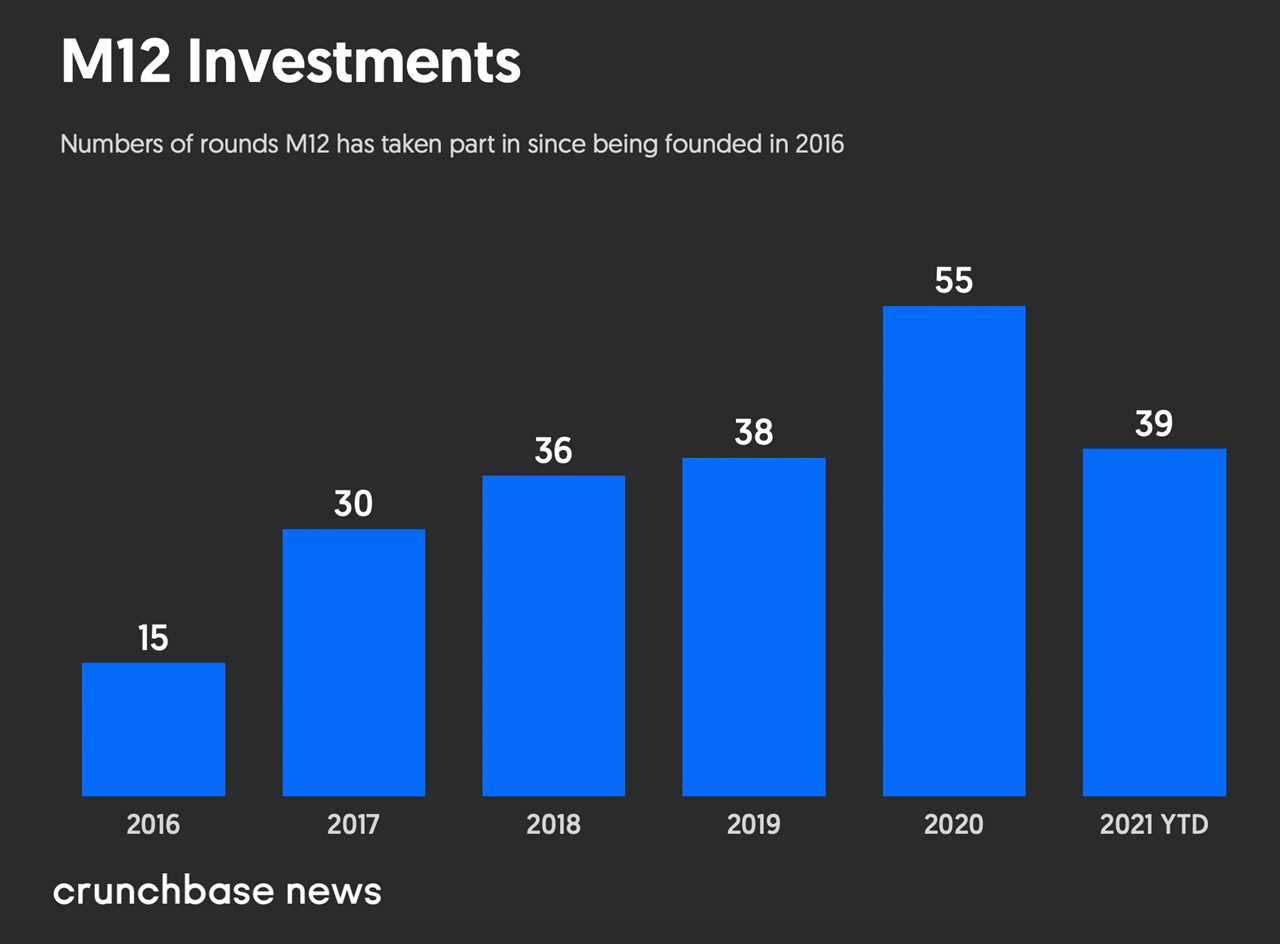 However, it’s important to understand that M12 is not your typical corporate venture fund. It is first and foremost driven by financial returns—it does not invest just for Microsoft corporate to gobble up that startup later or for “a seat at the table.”

In fact, a few years ago M12 did away with “right of first ” (ROF) terms—where an investor gets the first shot at buying the startup before any other suitor.

“We are financially focused, not strategic in that sense,” said Priyanka Mitra, a principal at M12 who invests in SaaS, infrastructure and health care IT for the firm. “However, we certainly look to help out the founders and companies we invest in.”

Since the fund’s founding in 2016, nearly all of our term sheets have been clean—without any restrictive terms, she added.

“We firmly believe that being fully aligned with founders is the only way to drive value to all stakeholders,” wrote former global head of M12 Nagraj Kashyap in his blog in March 2019 when speaking of getting rid of ROFs. At the time, M12 would use ROFs or other restrictive terms when investing in companies where other corporate VCs had similar terms. Such terms were included early on in the firm’s life on only a handful of deals.

In March 2019, M12 codified its commitment, refusing to insert restrictive terms in any of its term sheets, even if other corporate VCs it invests alongside require them.

Not surprisingly, as M12 has grown and invested in more companies, the size of the checks it writes also has gotten larger—especially with the venture world being on a tear the last few years. In the fund’s first three years, it was writing checks up to $10 million, but that amount has gradually grown to about $20 million. 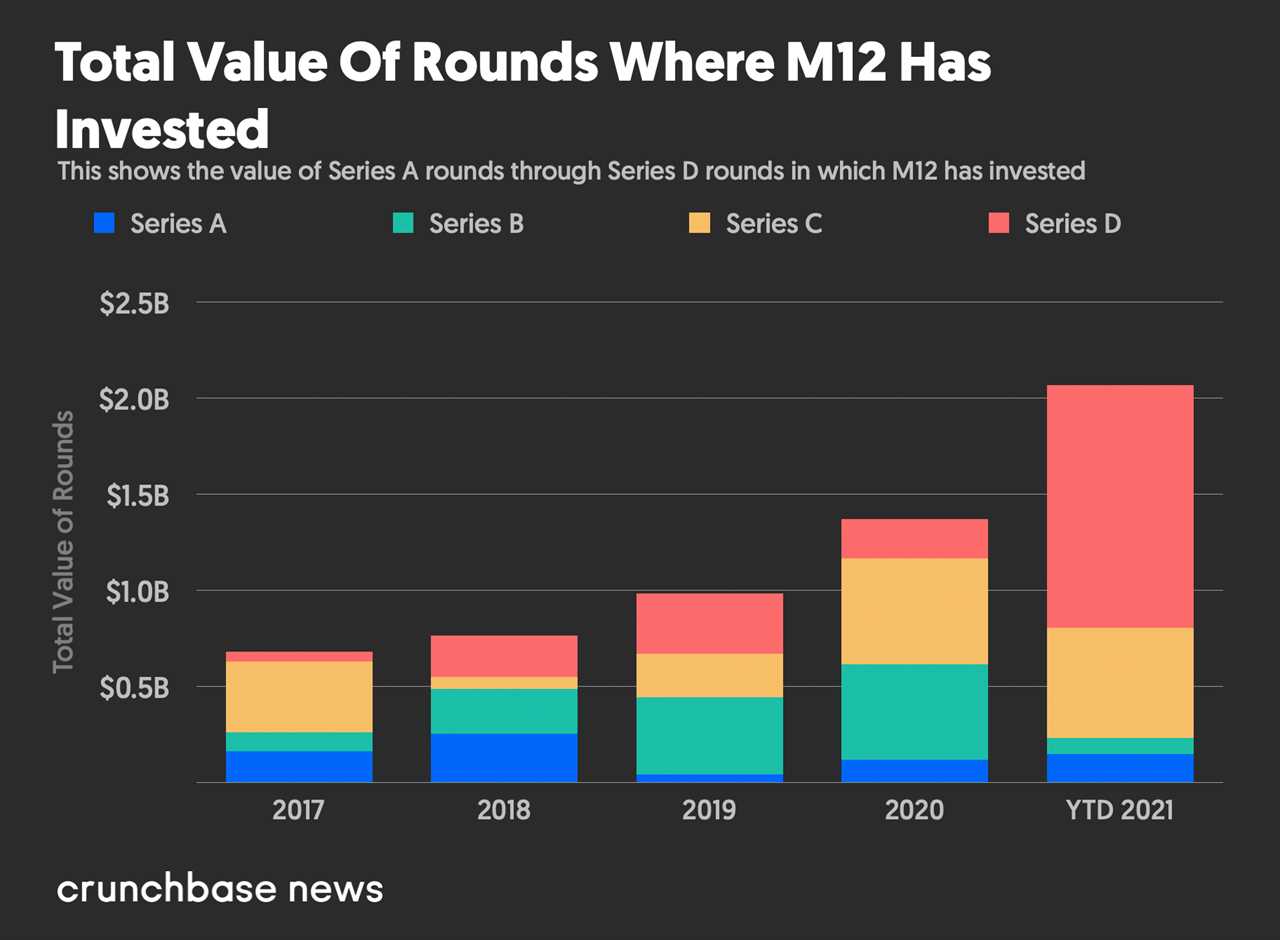 The firm has not just looked to invest more dollars, but to take the lead in more funding rounds. Last year, M12 led 13 rounds: a high for the firm. This year, it already has led 11 and seems like a sure bet to top 2020’s total. 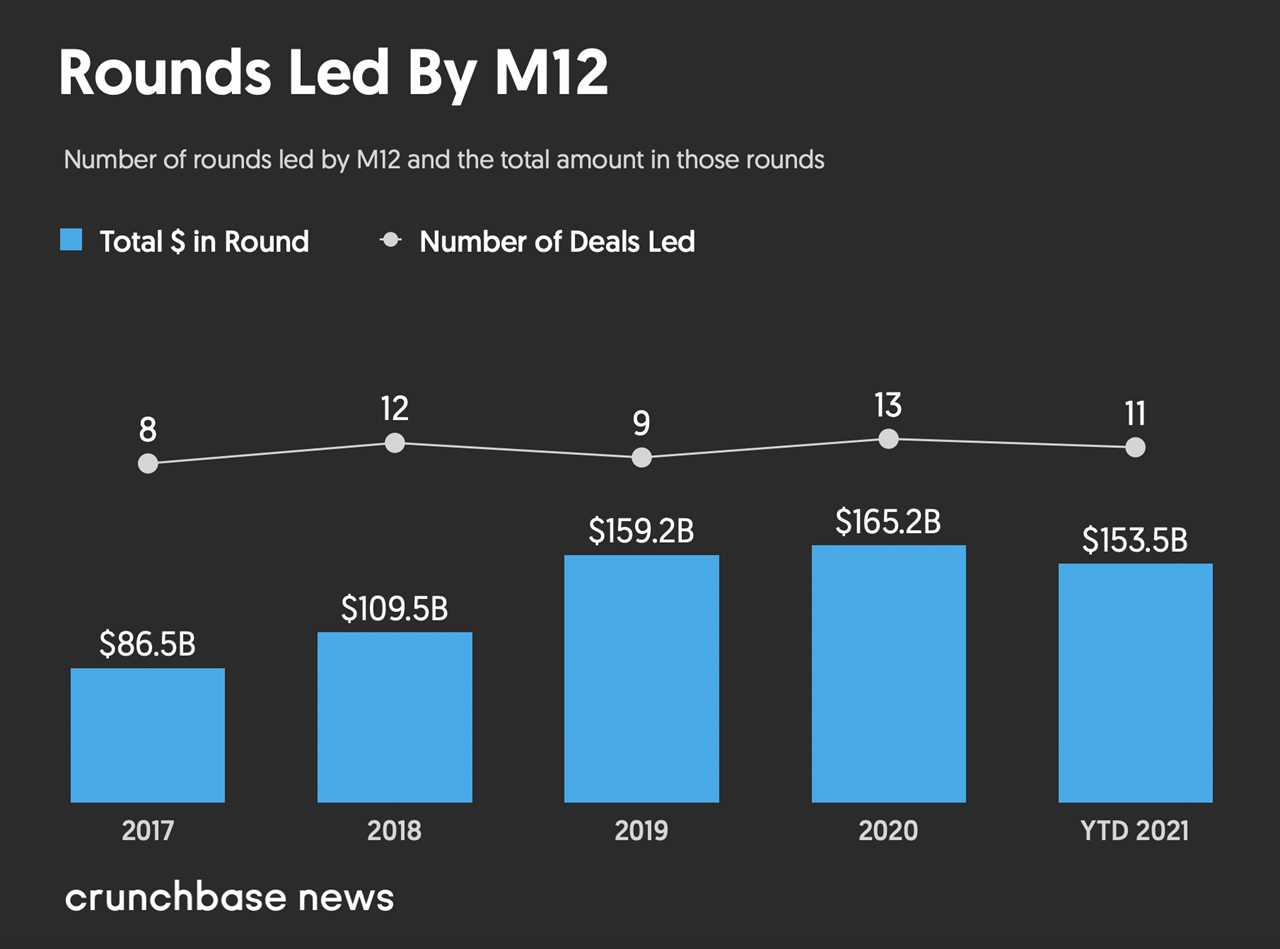 Some of the rounds M12 has led this year include:

“I think you are seeing us focus on more of that now,” Mitra said.

Focus is one of the things that attracted Matthew Goldstein to help co-found M12—then called Microsoft Ventures—in San Francisco in 2016 and open its European office in 2019.

“It’s very unique,” Goldstein said of the fund. Since Microsoft supports the fund financially, managing directors are left to pretty much solely look at investment opportunities without worrying about a large limited partner base.

“We are looking for the best tech solution available anywhere in the world and bringing it into Microsoft’s world,” according to Goldstein, an M12 managing director who invests in cybersecurity.

Steffens, managing director who leads investing and market development for M12 in North America and India, said a company like Palo Alto-based Databook is a textbook example of what M12 looks for and how it can sometimes find it.

M12 led the customer intelligence platform’s $16 million Series A in April, but was already familiar with the company as Microsoft was its largest customer—along with Salesforce1 , which also invested in the round.

“We just looked at it and asked ‘What can we do that would drive sales for them?’” Steffens said. “Well, we Microsoft—can buy more, but we also looked at ways to integrate it with (Microsoft) Teams and our other products. We are just beginning this with them.”

That muscle has helped M12 push 13 of the fund’s investments to unicorn status. While still a modest number when compared to many of the large corporate venture arms of companies like Intel, Cisco and Qualcomm, M12 is a relative newbie to the venture world. While GV, for example, has produced 45 unicorns, the Google-backed fund has been around since 2008—eight years longer than M12.

M12 and Microsoft are just at the beginning of a lot of new endeavors, one of which is ring fencing a new seed-stage vehicle within its fund to get into more companies early, and where it anticipates writing more checks between $500,000 and $2 million. The firm invested a new high for itself in seed funding last year when it took part in seven such rounds.

The new seed vehicle means the fund likely can do between 10 and 12 seed fundings a year, and part of the focus will be to seek out founders and entrepreneurs of differing backgrounds, Steffens said.

“We are taking a significant part of our seed fund to diverse founders,” she said. “That’s a huge focus for Microsoft and M12. A diverse workforce creates a diverse product portfolio.”

M12 has made 25 diversity investments since being founded, but has reached a high of seven this year alone, according to Crunchbase data.

Steffens is the executive sponsor of M12’s Female Founders competition, which the fund started in 2018 with EQT Ventures and SVB Financial Group. To date, the competition has deployed $10 million to six female-founded enterprise software and deeptech companies, most recently in partnership with Mayfield2 and Melinda Gates’ Pivotal Ventures via Microsoft Teams due to the COVID-19 pandemic.

While it can be viewed as a positive to be on the same page as your corporate benefactor on some issues such as diversity, the team at M12 has also had to navigate obstacles with a corporate development team that many VCs never have to worry about.

“It’s a fine line we have to walk,” said Samir Kumar, M12’s managing director investing in artificial intelligence/machine learning and deep tech. “You don’t want to be on a collision course to compete with Microsoft.”

That can be a difficult line to walk when Microsoft’s internal development team is larger than some small towns.

With so much internal development going on in so many areas, Kumar said it can be like “threading a needle” to find areas to invest in that do not have too much overlap or just enough differentiation from what the tech titan is working on.

“It’s not easy, you have to build a network and build relationships to know what’s going on,” Kumar said. “I have to know the CTO and what area they want into in the future.”

Kumar pointed to an area like quantum computing as an example M12 has looked at investing in, even as Microsoft itself is doing work in the area. In April 2020, M12 took part in Palo Alto-based PsiQuantum’s $150 million Series C and also its $450 million Series D just a couple of months ago.

The investments were made even though Microsoft has its own internal quantum computing initiatives.

“Micorsoft has its own program, but PsiQuantum and Microsoft share a vision, so we did it,” Kumar said.

With a nearly $2.3 trillion market cap, Microsoft likely is not moved by quarter-billion-dollar exits.

“Microsoft does not need our money … it’s really a drop in the bucket,” Goldstein laughed.

Nevertheless, M12 has seen a steady flow of exits despite being only 5 years old. That includes a firm high of six so far this year, including:

With more exits likely to come this year and moving forward, Gonzalez—who took over her position in late July—is bullish on the future of the fund.

“I’m looking forward to what the next five years will bring with continued discovery, innovation and growth—particularly in health care and life sciences, cybersecurity and productivity,” Gonzalez said.

Correction: An earlier version of this story misstated the number of unicorns in M12’s portfolio. The correct number is 13.