The startup funding party is still raging.North American venture capital investment held up at near-record-setting levels in the third quarter, as.. 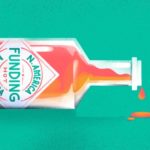 North American venture capital investment held up at near-record-setting levels in the third quarter, as both early- and late-stage dealmaking remained on fire and big exits accumulated.

Overall, investors put $79.6 billion to work across all stages from seed through technology growth, according to Crunchbase estimates. That’s just a hair shy of the $80 billion total for the prior quarter, and the second-highest total on record.

To put in this perspective, the chart below tallies total investment, color-coded by stage, over the past seven quarters: 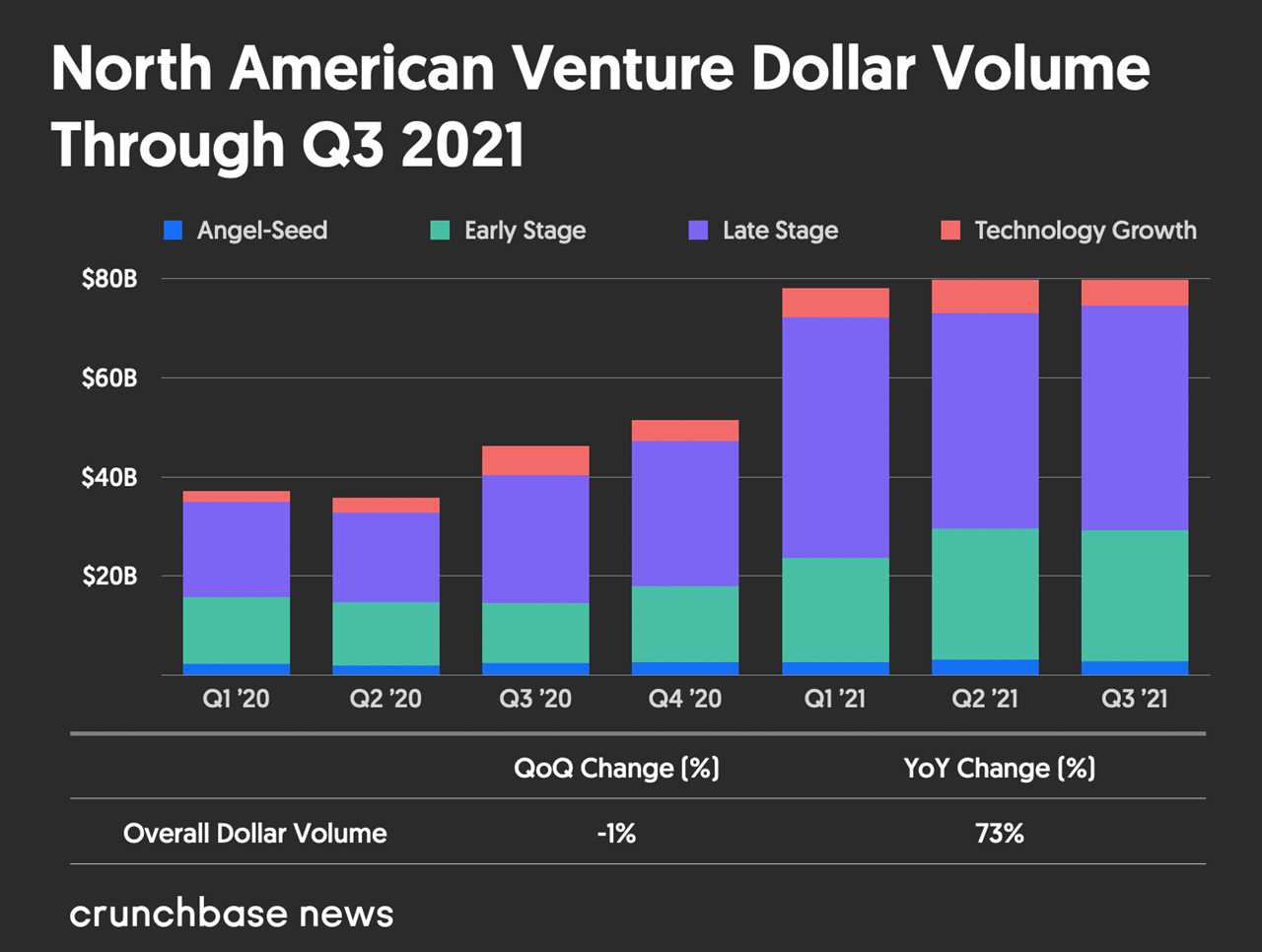 Although investment totals stayed lofty, round counts ticked down considerably in Q3, as investors piled bigger sums into fewer companies. Along with giant rounds, investors also partook in some massive exits in Q3, led by public offerings by Robinhood and Toast.

Below, we take a closer look at funding dynamics for the quarter, most of which are a continuation of ongoing bullish trends. We’ll start with a look at funding stage-by-stage, followed with a summation of exits, including both public offerings and M&A.

Late stage accounts for the majority of startup investment, so we’ll start here.

Investors put $50.5 billion into late-stage venture and technology growth deals in the just-ended quarter. That’s on par with the prior quarter, but marks a gain of nearly 60 percent over Q3 of 2020.

Round counts, meanwhile, ticked down a bit from the prior quarter. In all, 444 U.S. and Canadian companies raised late-stage or tech growth rounds in Q3. That’s down 8 percent from Q2 and up 23 percent from year-ago levels.

We lay out more detail on investment totals and round counts for the past five quarters in the chart below: 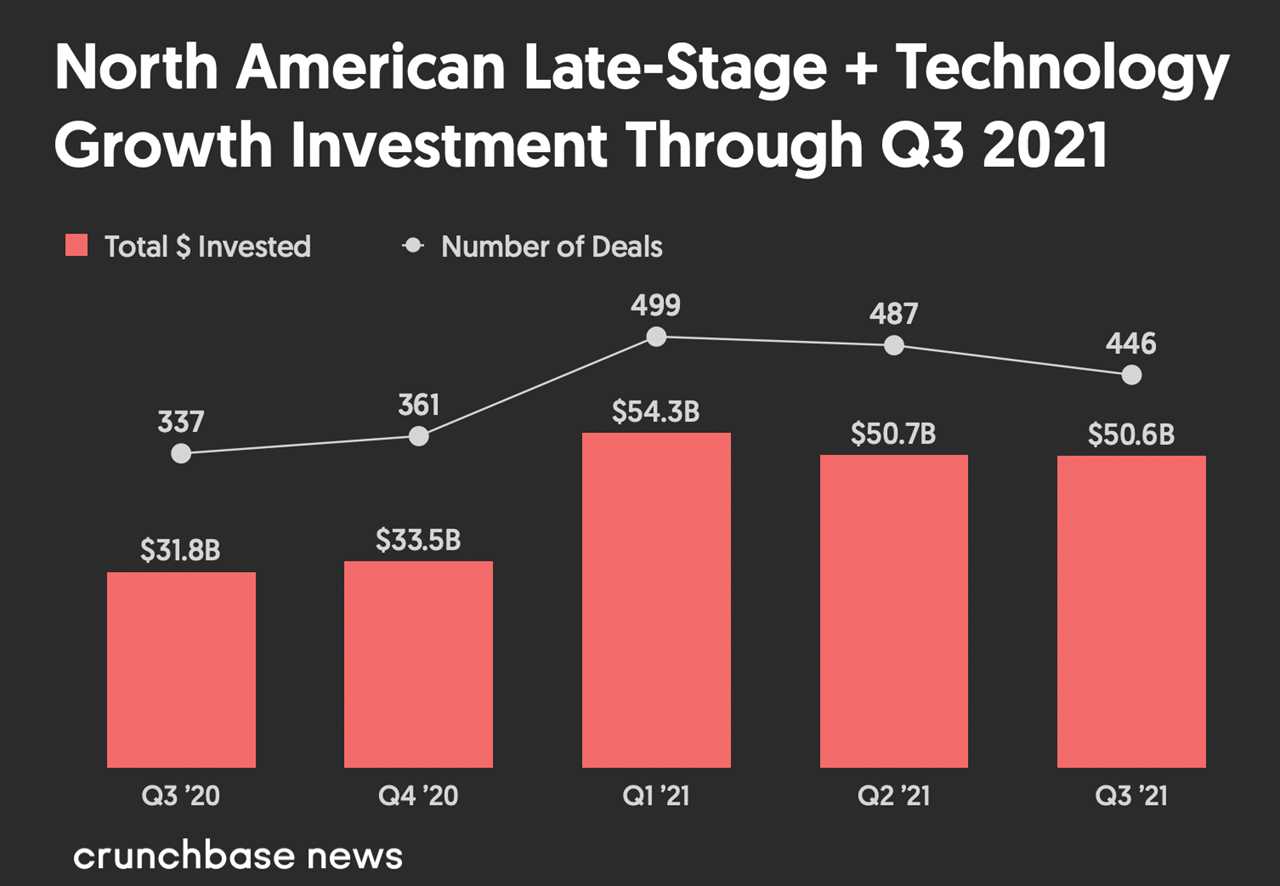 For Q3, a few really giant funding rounds played a big part in pushing up late-stage totals. The largest round this past quarter went to electric-vehicle maker Rivian, which pulled in $2.5 billion in pre-IPO funding, shortly followed by filing to go public. Other major funding recipients include AI-enabled data analytics platform Databricks, which landed $1.6 billion; online banking provider Chime, which raised $1.1 billion; and fast delivery service Gopuff, which secured $1 billion.

Early-stage funding was also on a tear in Q3.

Over the past quarter, investors put $26.3 billion into early-stage deals (Series A and B). That’s about on par with the record-setting prior quarter, and more than double year-ago levels.

Round counts clocked in at 1,038 for Q3. That’s down a bit from the previous quarter, but still marks the second-highest total in the past five quarters.

We lay out more detail on early-stage dealmaking for the past five quarters in the chart below: 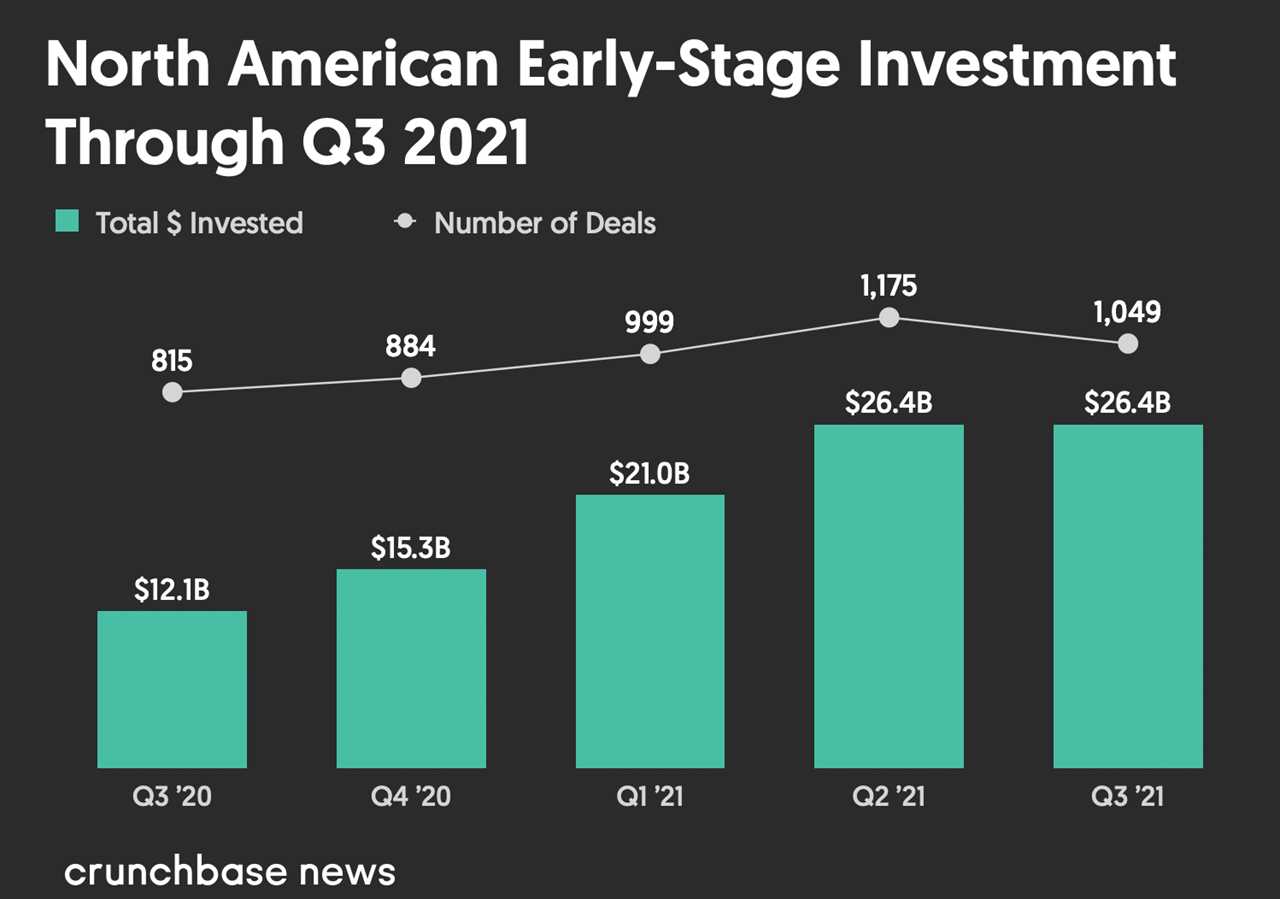 The past quarter also offered fresh evidence that the term “early stage” in no way connotes a smaller round. In fact, several of the largest rounds this past quarter were Series A and B deals.

The largest early-stage round went to Laronde, a developer of programmable medicines using an approach it calls Endless RNA, which raised $440 million in an August Series B financing. Other large funding recipients include Sonoma Biotherapeutics, a developer of autoimmune therapies that pulled in $265 million; Blockstream, a provider of Bitcoin and blockchain technology for financial markets that secured $210 million; and ICON Technology, a 3D printing- and robotics-enabled homebuilder that landed $207 million.

Everything in the venture capital universe is getting more expensive, and that includes seed rounds. A few years ago, seed deals above $3 million were comparatively unusual. Now they’re commonplace, with more than 300 in Q3 alone for North America, per Crunchbase data.

The ballooning size of a typical seed round explains why funding at this stage continues to hold strong. For Q3, investors put $2.8 billion into 1,372 reported rounds at seed stage. That’s down from Q2, but because seed rounds often get reported to our database weeks or months after they close, we expect the totals to shift higher over time.

In the chart below, we compare seed round counts and funding totals over the past five quarters: 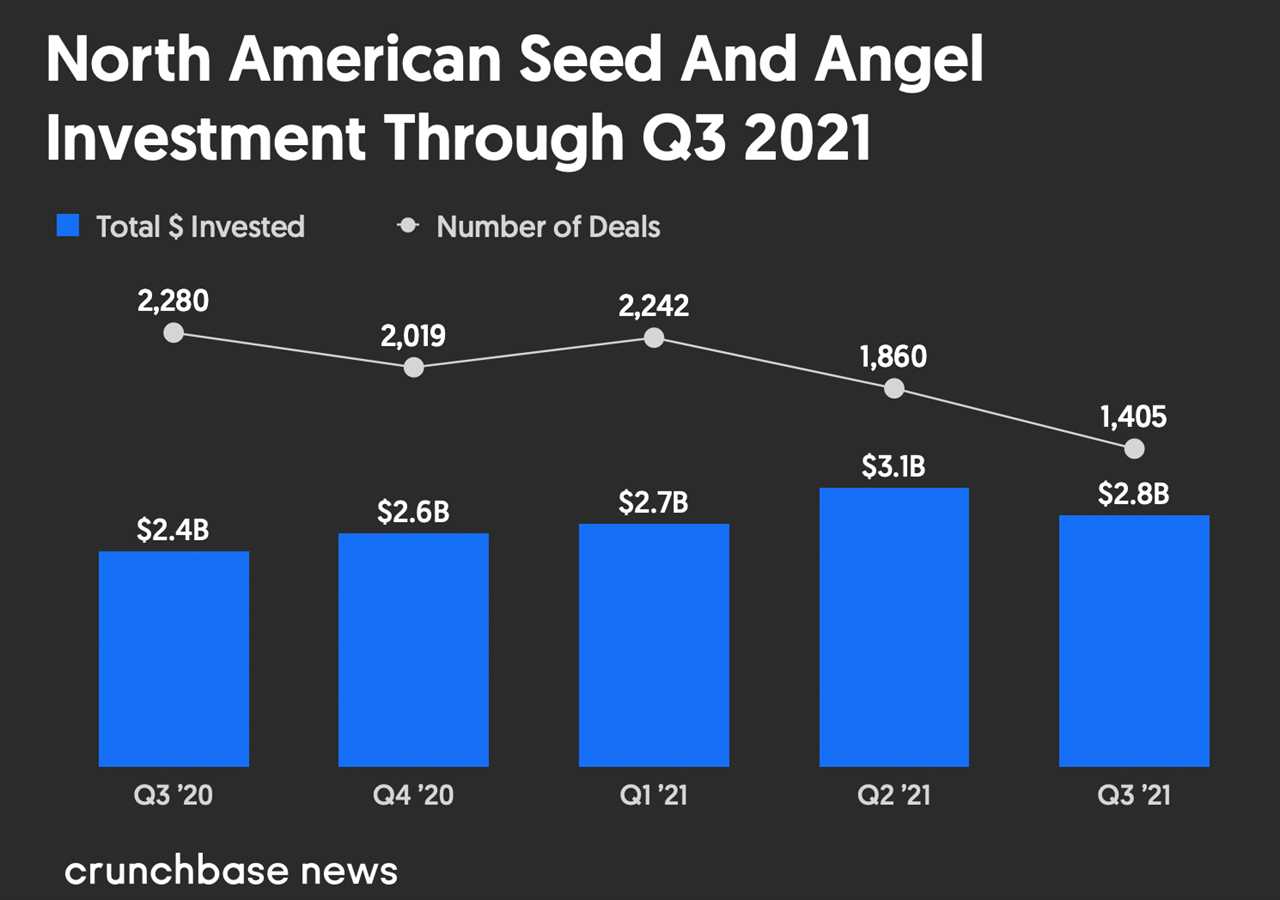 Investors weren’t just piling money into startups this past quarter. They were also generating some big returns as portfolio companies exited either through public market debuts or acquisitions.

Major public market debuts in Q3 came in a variety of forms. There were traditional IPOs, direct listings, and also a few big offerings for companies opting to go public through a merger with a blank-check acquirer.

Below, we look at seven of the biggest debuts of the quarter, looking at initial valuations as well as the listing types chosen for going public: 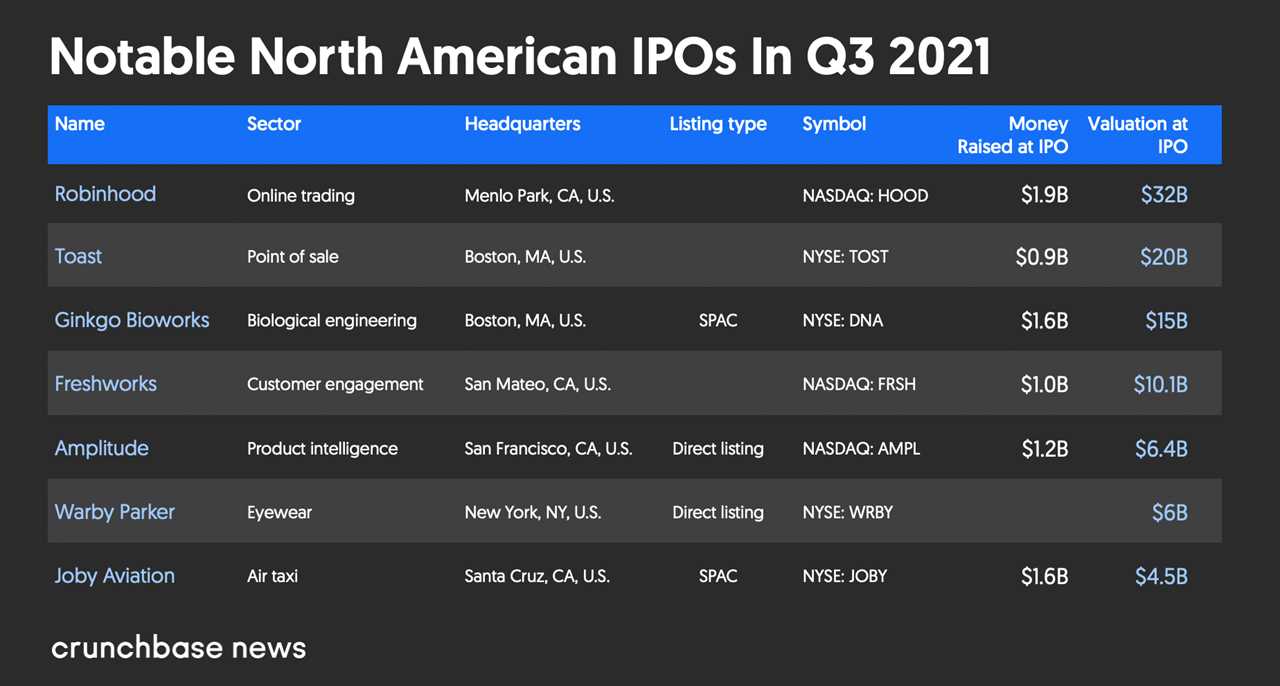 This past quarter was unusual for private company M&A. The largest anticipated deal–Zoom’s planned $14.7 billion acquisition of contact center software provider Five9—fell apart a couple months after it was announced.

Then, the biggest still-pending tech deal–Intuit’s $12 billion purchase of email marketing provider Mailchimp–didn’t make any money for private investors. Extraordinarily, Mailchimp managed to bootstrap its way to that lofty valuation.

Below, we compare numbers for six of the largest acquisitions of venture-backed companies in Q3, plus Mailchimp: 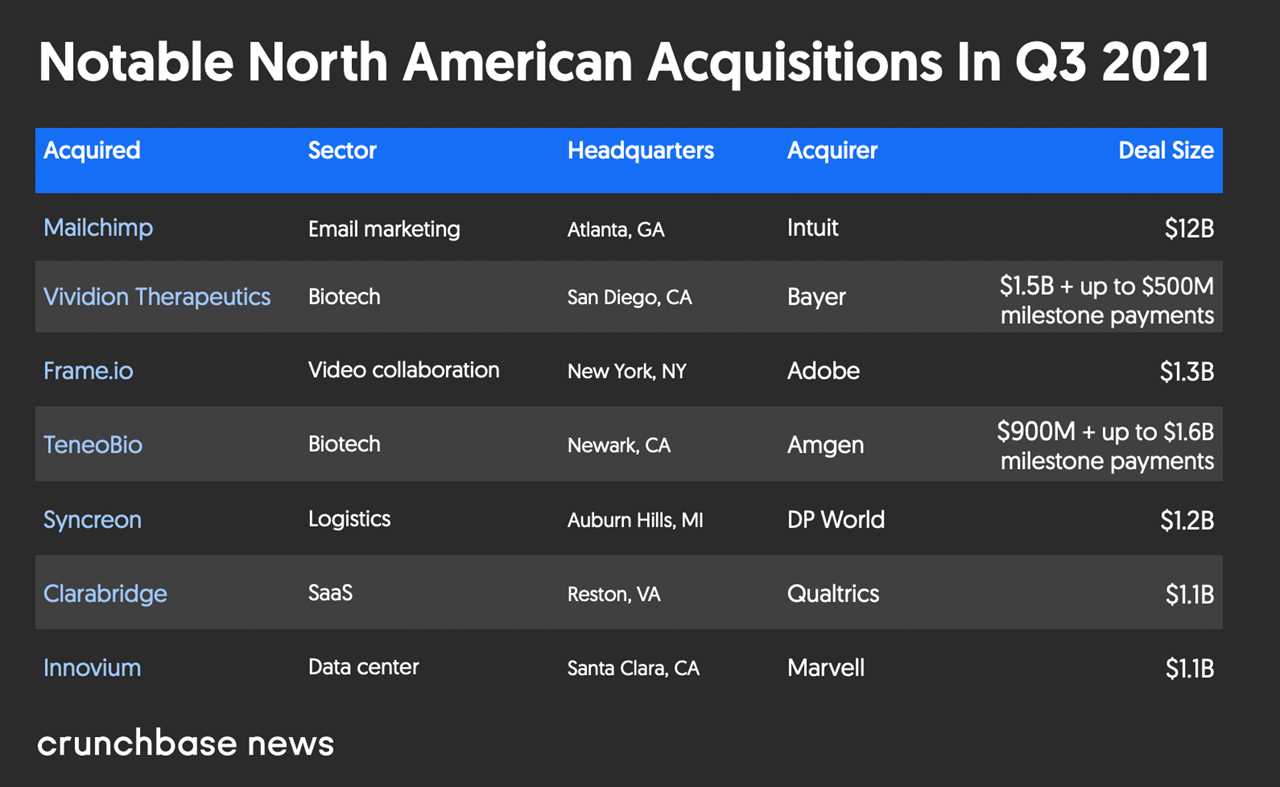 We can sum up Q3 venture investment and exit activity in a few words: Things are still looking bullish.

Sure, we can find some negative indicators and developments. A market selloff has wiped out about $75 billion of the value of companies that went public using SPACs. Several prominent venture-backed companies, including 23andMe, Hippo and Metromile have been among the hard-hit.

The quarter’s largest traditional, venture-backed IPO, no-fee stock and crypto trading platform Robinhood, has also had its ups and downs. Shares spiked a few days after their market debut, before giving up most of the gains in subsequent weeks.

Still, overall, things are going gangbusters in the startup sphere. That includes big rounds, big exits and plenty of cash-rich funds sitting on the sidelines ready to invest. Certainly this party’s not getting started. It’s been raging for a while. But it’s definitely too soon to say it’s winding down.

The data contained in this report comes directly from Crunchbase, and is based on reported data. Data reported is as of Oct. 5, 2021. 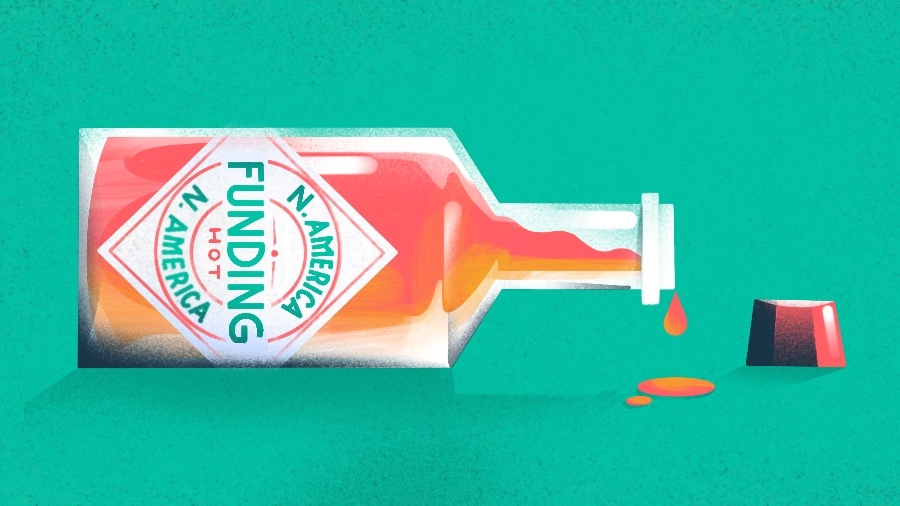