Asia, like pretty much the rest of the world, is enjoying an investment environment not seen in quite some time.Subscribe to the Crunchbase.. 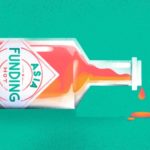 Asia, like pretty much the rest of the world, is enjoying an investment environment not seen in quite some time.

Although Asia did not see the same year-to-year gains we’ve seen in North America and Europe, it did see funding hit $42.7 billion—its biggest quarter since the Q2 2018, when total funding hit $47.1 billion.

In fact, Asia investment this year has already surpassed the total of 2019 and nearly that of all 2020. Thus far, the continent has realized $106.1 billion in funding—compared to $98.2 billion in 2019 and $109.5 billion last year. However, funding will need to pick up to catch the robust investment 2018 saw, when $149.9 billion came to companies in the continent. 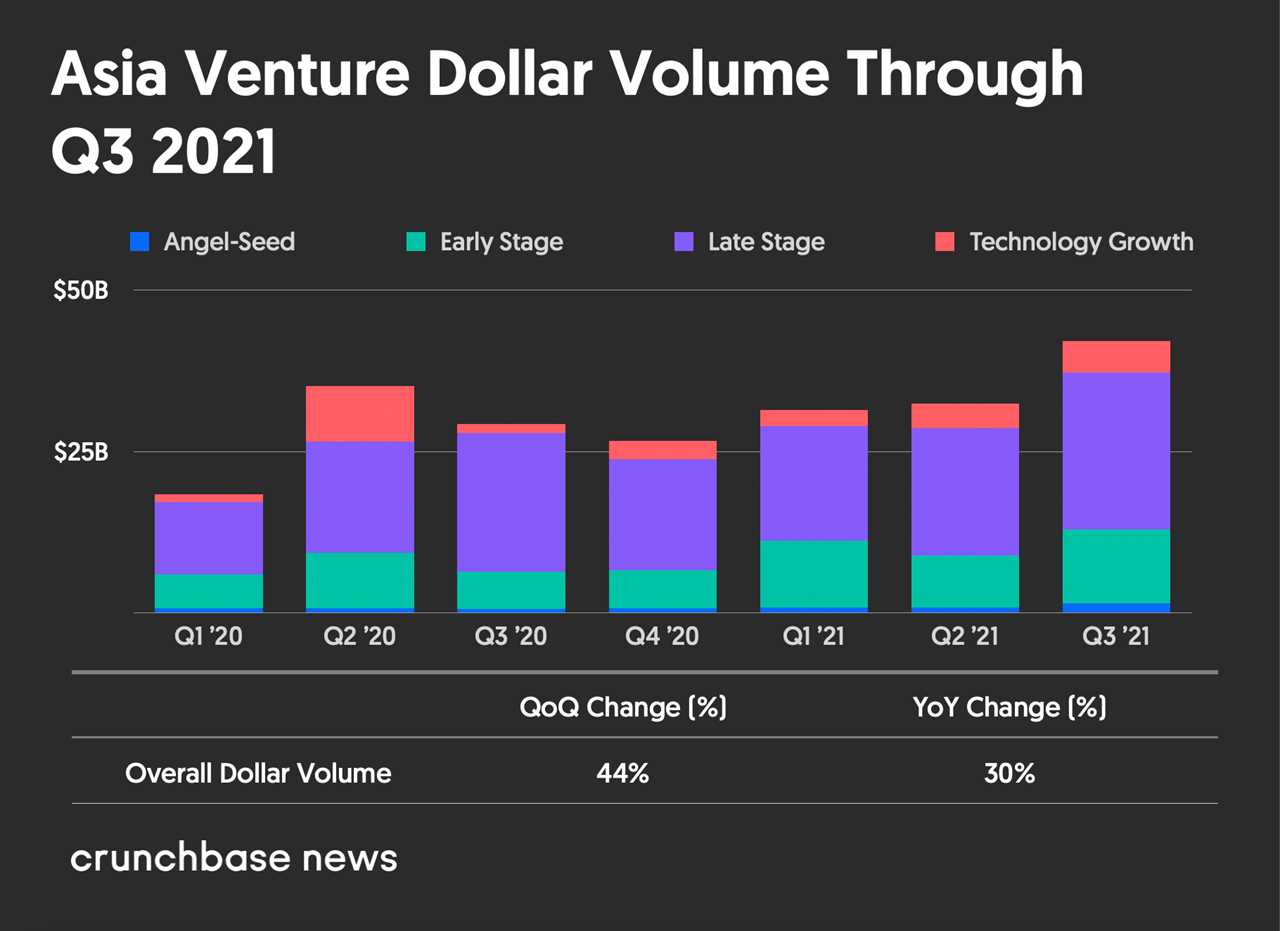 Despite funding being up, deal flow remained basically stagnant. The third quarter saw 1,224 deals closed, up by just two from last quarter and actually down 6.7 percent from the same quarter last year.

More money but fewer deals would seem to point to the fact that funding rounds are getting larger—likely as valuations for many startups continue to creep up.

Funding at all stages is up year to year, as well as quarter to quarter. Angel and seed stages saw the greatest jump year to year, increasing by more than 139 percent. Early-stage funding realized the second-largest gains year to year, nearly doubling. 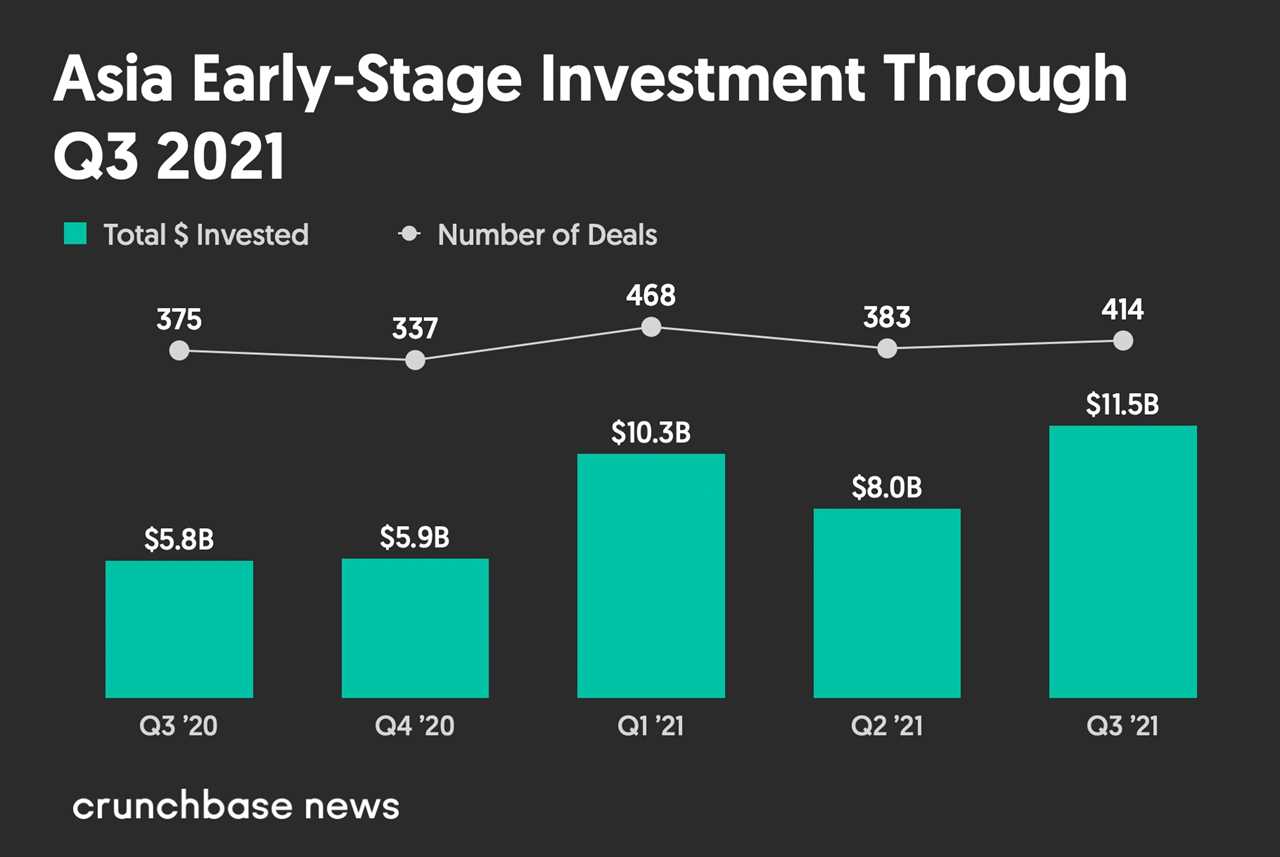 In fact, both seed and early stage saw their largest quarters since Q3 2018. Seed fundings raked in $1.5 billion in the third quarter of this year—the most since reaching $1.8 billion in the same quarter of 2018.

Likewise, early-stage funding was $11.5 billion, the highest amount since hitting an astounding $16 billion in 2018. The largest early-stage round in the region was for China-based Svolt Energy Technology, an electric vehicle battery materials company, which raised a $1.6 billion Series B in August.

Despite the high dollar amounts, deal volume did not see a significant uptick. Seed funding actually saw its lowest deal volume since at least before 2018, with only 610 deals reported—a 6.3 percent quarter-to-quarter decline and an 18.1 percent drop from the third quarter of last year.

Early-stage funding saw 414 deals—an 8.1 percent gain from the previous quarter and up more than 10.4 percent from the same quarter of last year.

Just like early and seed rounds, late-stage and technologies funding continued to climb in the region. Those late-stage growth rounds—from both venture capital and private equity—totaled $29.2 billion for the quarter. That represents the highest total in any quarter since Q2 2018 when late-stage growth funding totaled more than $36 billion. 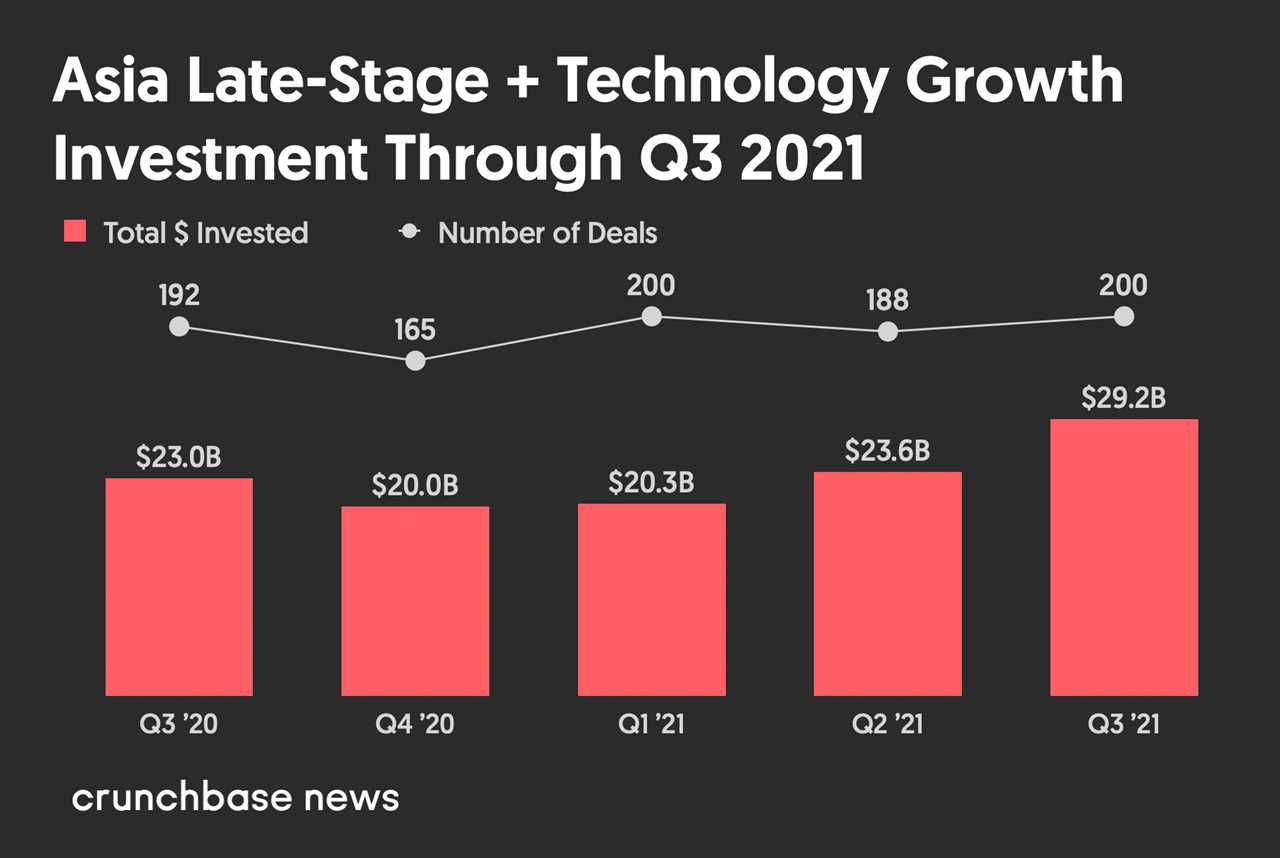 Some of the most notable rounds in the most recent quarter include a $3.6 billion private equity investment in India-based online shopping website Flipkart; a $1.7 billion venture round deal for South Korea-based travel site Yanolja; and a $1.3 billion Series J for India-based on-demand food delivery platform Swiggy.

The funding rounds Flipkart and Swiggy saw in Q3 were far from the only big rounds Indian companies saw. The country actually topped China for total investments in the quarter—something it had not done since the second quarter of last year. 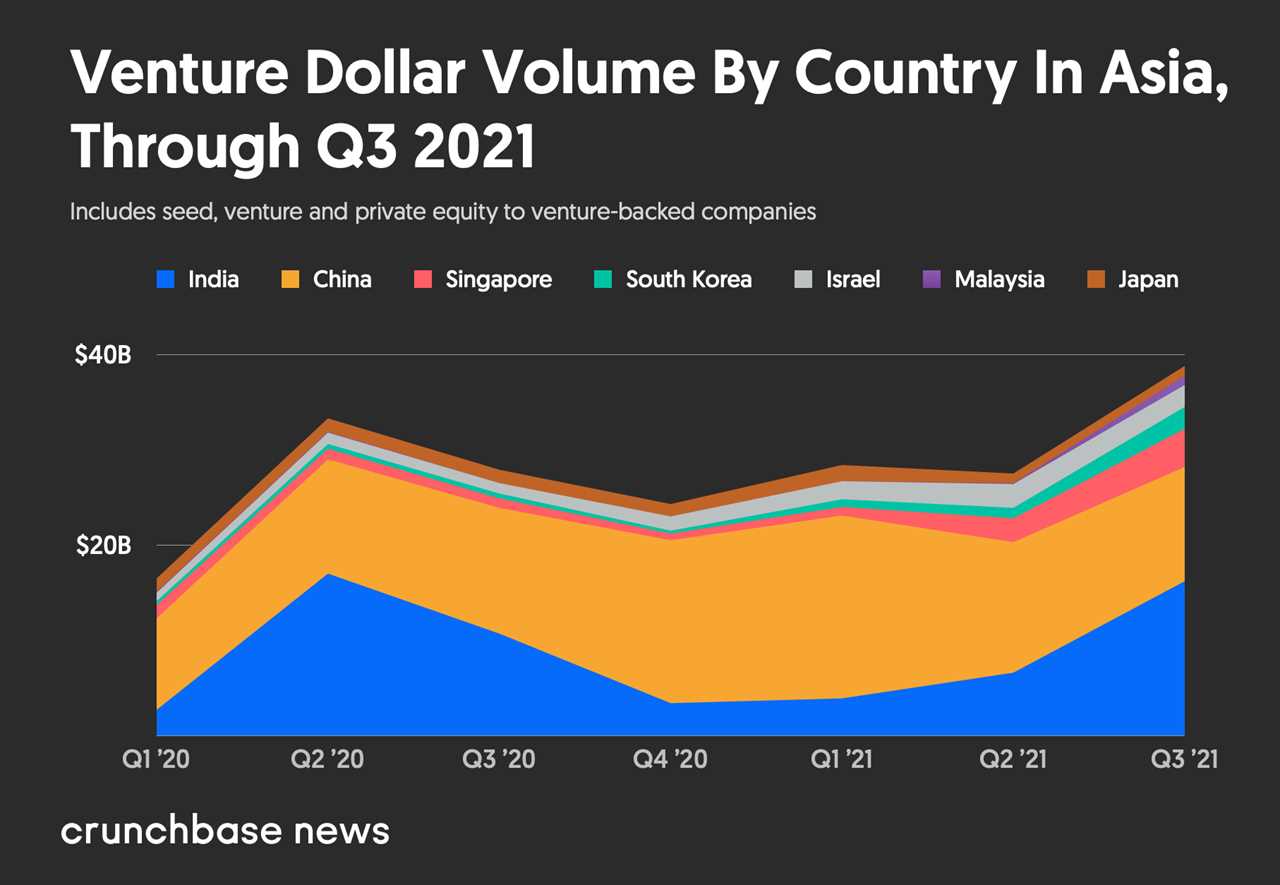 India had $16.2 billion of investment dollars go to companies there in Q3, a 145.1 percent increase far outpacing the $6.6 billion it saw in the previous quarter. It’s the most money Indian companies have secured since the region saw $17 billion in the second quarter of 2020.

Investors seemed to pull back on Chinese companies a little in Q3—possibly because of new regulations and rules on going public. The somewhat turbulent quarter in China still saw $12 billion come to companies there, a 12 percent decline from the previous quarter, which saw $13.7 billion, and an 8.7 percent decline year to year.

Singapore, South Korea and Israel round out the top five countries receiving investment dollars in the region. Both Singapore and South Korea had strong gains—seeing dollars increase 291.1 percent and 407 percent year to year, respectively.

Many of the largest names in venture capital remained extremely busy in Asia in Q3. Sequoia Capital’s India and China offices, SoftBank Vision Fund UK and Tiger Global were the most active venture and growth investors for the quarter. Sequoia Capital China topped the group, leading or co-leading 10 rounds while taking part in 30 total. 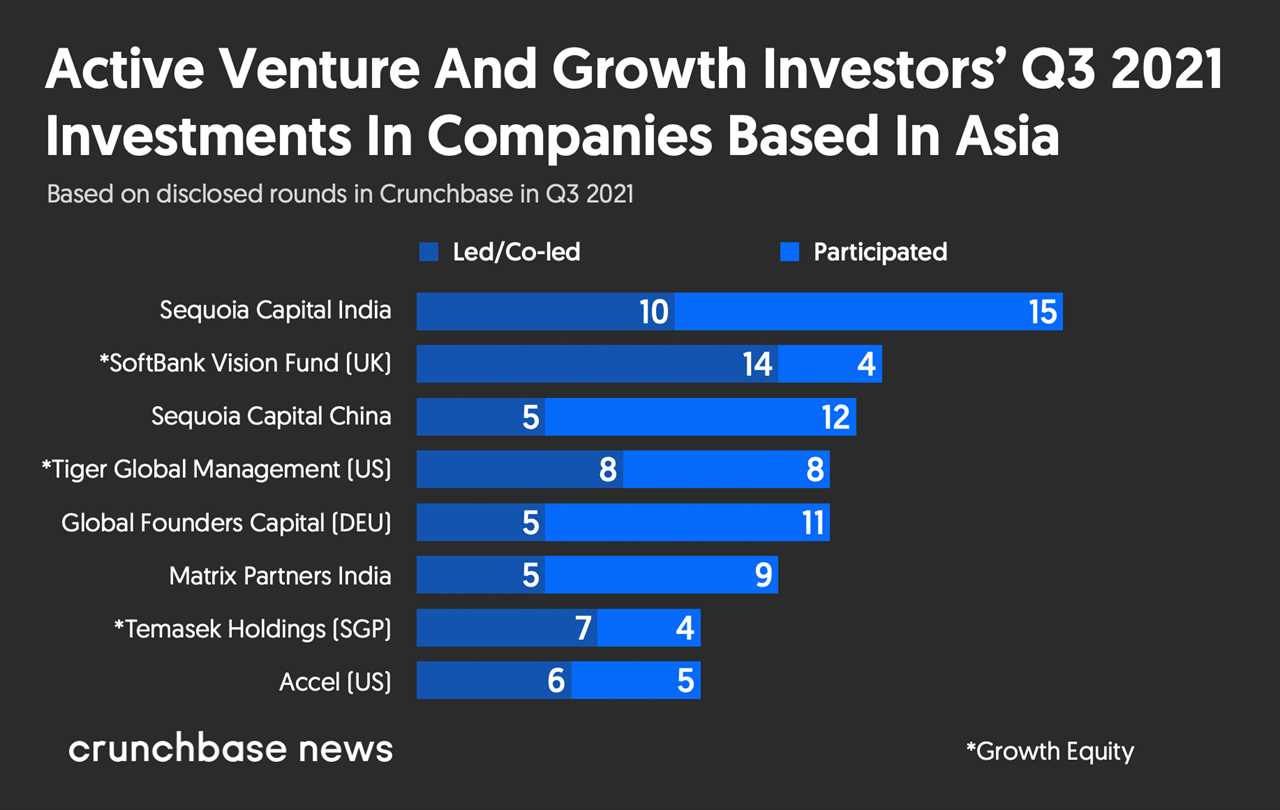 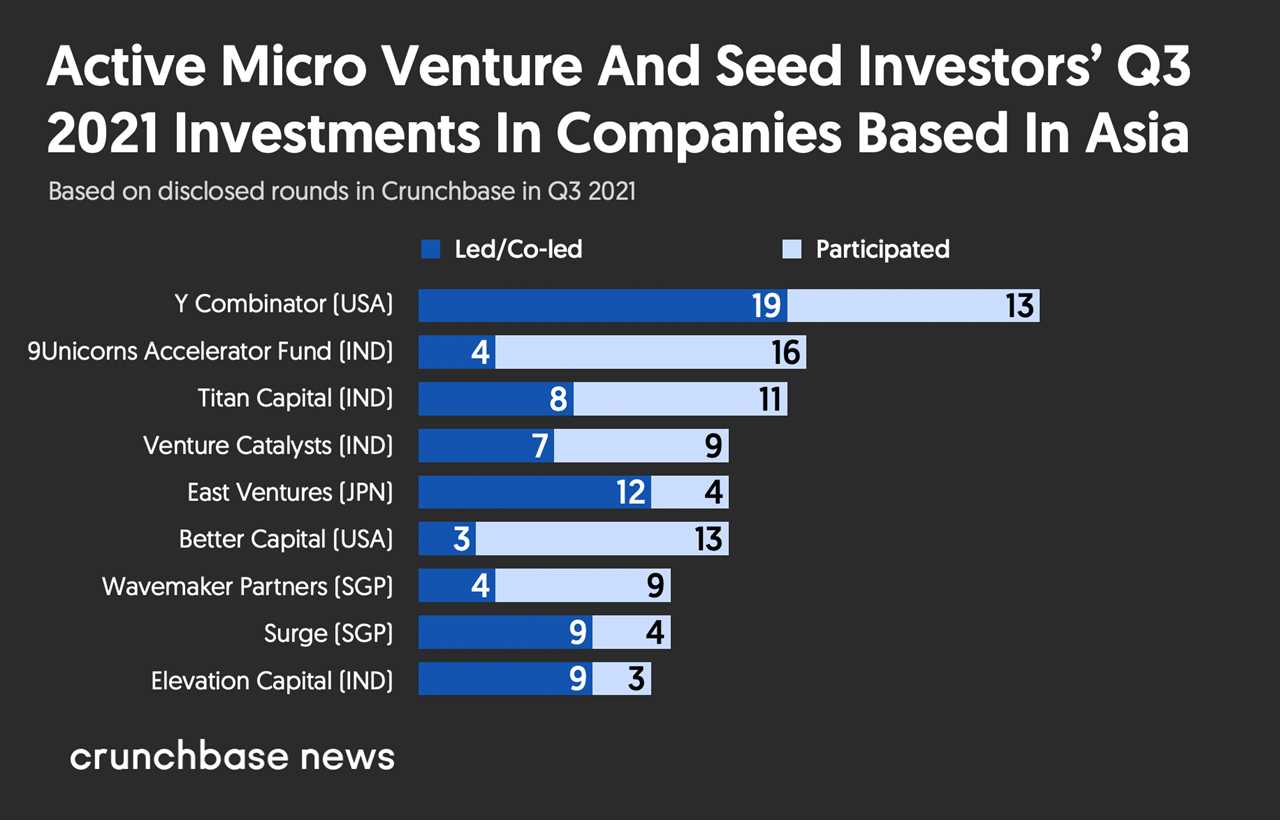 While funding continues to increase, the third quarter produced only a handful of exits for investors in Asia. The region saw just nine IPOs, with the most notable being India-based food delivery company Zomato going public in July at a valuation of over $12 billion.

Acquisitions were more prevalent, with 59 deals occurring in the region in Q3. The two biggest were PayPal acquiring Japan-based online buying platform Paidy for $2.7 billion in September and PayU buying India-based digital payment provider Billdesk for $4.7 billion in August.

Asia is well on its way to its best funding year since 2018. With the region already hitting $106.1 billion in investment, it is unlikely to reach the nearly $150 billion mark that year saw—however, with the crazy venture markets of 2021 it could make a run.

What may be most amazing is that even as funding for Chinese companies has somewhat cooled—possibly because of the new investment regulations the government seems to roll out weekly—other areas of the region have picked up that slack.

After seeing more than $27 billion invested in the country in the middle two quarters of last year, India saw a slowdown in venture capital. That drought appears to be over, however, with investment in the country outpacing that seen in China for the first time since the second quarter of last year—also the only time that has occurred.

Consumer-facing applications seem to be helping lead the way, with companies like Ola, Swiggy, Flipkart and ShareChat all seeing large rounds this year; with investors likely seeing a huge market for growth of such platforms in the world’s second-most populous country.

Early stage consists of Series A and Series B rounds, as well as other round types. Crunchbase includes venture rounds of unknown series, corporate venture and other rounds above $3 million, and those less than or equal to $15 million. 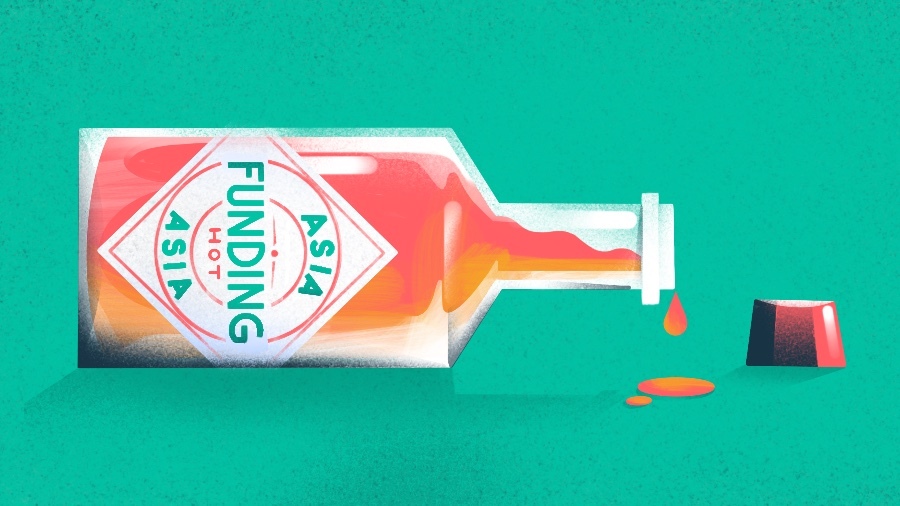