Jeff Bezos, the founder of Amazon and Blue Origin, talks about the link between space and Earth’s welfare with moderator Adi Ignatius at a forum at.. 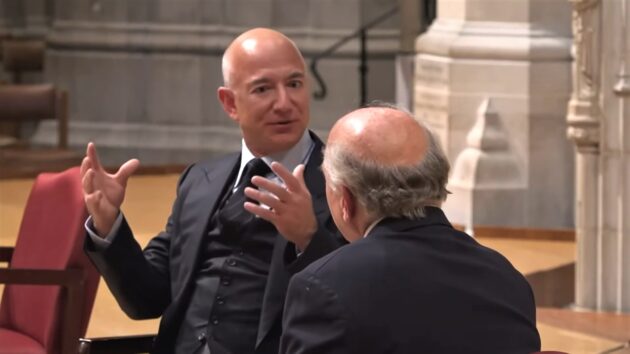 Jeff Bezos, the founder of Amazon and Blue Origin, talks about the link between space and Earth’s welfare with moderator Adi Ignatius at a forum at Washington National Cathedral. (Space SPAN via YouTube)

Jeff Bezos’ Blue Origin space venture has been getting a lot of press lately, but the Amazon founder and chairman says he’s spending more money nowadays on Earth’s environmental welfare through his Bezos Earth Fund.

Four and a half years ago, Bezos told reporters that he was selling about a billion dollars’ worth of his Amazon stock on a yearly basis to put toward Blue Origin.

But at least for the time being, he says that’s trumped by his $10 billion, 10-year commitment to the Bezos Earth Fund, which distributes grants to projects around the globe. During this month’s U.N. climate summit in Scotland, the fund announced a $2 billion round of grants supporting land restoration and food production.

Bezos cited the funding during last week’s Ignatius Forum at the Washington National Cathedral in D.C. as evidence that he wasn’t just a starry-eyed billionaire with no concern about Earth’s welfare.

Much of the discussion touched upon themes that Bezos has brought up before — including the idea that the world is going to have to turn to space resources and put the bulk of its heavy-industry facilities in space in order to preserve our own planet for “residential” zoning.

Longer-range, Bezos foresees an economy supported by millions of people living and working in space — perhaps in the sorts of manufactured habitats envisioned by his mentor at Princeton, the late physicist Gerard O’Neill.

Bezos confirmed, once again, the claim by a high-school girlfriend that he founded Amazon in part to accumulate the wealth he could put toward his space venture.

“It is extremely handy to have a lucrative day job if you are going to have a very expensive night job, and that’s what Blue Origin is, for sure,” he told Ignatius.

Today, Blue Origin has about 4,000 employees, with most of them based at the company’s headquarters in Kent, Wash. Bezos himself was among those taking the first ride on Blue Origin’s New Shepard suborbital spaceship in Texas this summer, and the orbital-class New Glenn rocket is under development in Florida.

Blue Origin is continuing to work on its lunar lander concept even though it lost out to SpaceX on an initial contract, and it’s also leading an industry team that’s aiming to build a commercial space station during the next decade.

During last week’s event, Bezos played up the connection between outer-space experiences and a wider perspective on Earth and its environment, also known as the Overview Effect.

“The magnitude of that experience was so much bigger than I could have ever anticipated,” he said, “and it really is such a change in perspective that shows you in a very powerful and emotional way just how fragile this Earth is.”

Bezos said each of Blue Origin’s space travelers becomes “an ambassador for Earth” after the flight. He pointed in particular to how deeply Star Trek actor William Shatner was moved by his suborbital spaceflight in October.

“When he did start to speak, it was one of the most moving experiences of my life,” Bezos said. “He was so emotional, there were tears streaming down his face. … He has been the best ambassador for looking at this planet and that transformation that he experienced.”

The next New Shepard flight is expected to take place by the end of the year, and the launch pace could pick up next year. So far, Blue Origin has been relying on private sales, at as-yet-undisclosed prices that might range into millions of dollars. But Bezos promised that the price will come down as the space travel industry transitions from the equivalent of the 1920s-era barnstorming era to the equivalent of the 21st-century commercial jet era.

“We need to get to the 787 of space travel,” he said. “When we do that, that will unlock this experience for millions of people.”

He also promised, half-jokingly, that future space settlements will be able to get Amazon Prime. “It’ll be built in,” he said. “Amazon hypersonic delivery: It’s coming soon to you.”