An essay criticizing Blue Origin’s attitude toward flight safety and sexual harassment also raises concern about the environmental impact of its.. 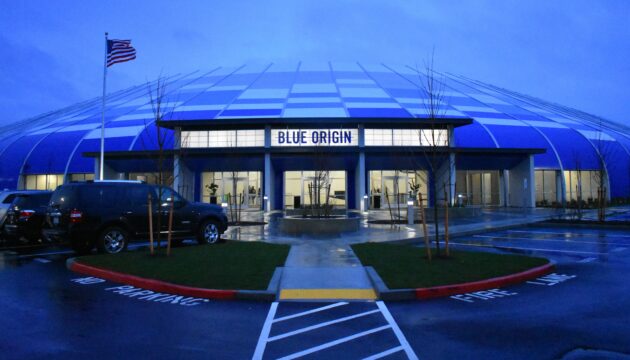 A former employee of Jeff Bezos’ Blue Origin space venture has given up her anonymity to lead a campaign accusing the company of laxity when it comes to safety and sexual harassment.

The allegations from Alexandra Abrams, who served as Blue Origin’s head of employee communications until her dismissal in 2019, are detailed in an essay published on Lioness.co and in an interview with CBS News. Abrams said the Lioness essay was written in collaboration with 20 former and current Blue Origin employees who aren’t identified.

Abrams and her co-writers say that the types of gender gaps often seen in the aerospace industry “manifest in a particular brand of sexism,” that dissent is suppressed, and that Bezos’ competition with fellow billionaires Elon Musk and Richard Branson “seemed to take precedence over safety concerns” in planning for crewed spaceflights.

Blue Origin CEO Bob Smith was portrayed as leading the push toward flying people on Blue Origin’s New Shepard suborbital spacecraft. Bezos and three crewmates rode on the first crewed New Shepard flight in July, and the second crewed flight is due for launch from Blue Origin’s West Texas spaceport in two weeks.

“Ms. Abrams was dismissed for cause two years ago after repeated warnings for issues involving federal export control regulations,” a company spokesperson said. “Blue Origin has no tolerance for discrimination or harassment of any kind. We provide numerous avenues for employees, including a 24/7 anonymous hotline, and will promptly investigate any new claims of misconduct.”

Abrams told CBS that her supervisor gave her a different reason at the time: “He said, ‘Bob and I can’t trust you.'” (See the update below for a more detailed response from Abrams about her dismissal.)

Alexandra Abrams, a former head of employee communications for Blue Origin, is speaking out against the company to @LaurieSegall.

“You cannot create a culture of safety and a culture of fear at the same time. They are incompatible.” pic.twitter.com/JHuFY3cjcs

Abrams said her turning point came when she was asked to put policies in place that, in her view, would have limited employees’ ability to speak out about internal problems. Abrams told CBS that she met with current and former Blue Origin employees at her home to work out the text of their essay on disposable laptops, and that the text was sent to the Federal Aviation Administration.

In a statement emailed to GeekWire, the FAA said it “takes every safety allegation seriously, and the agency is reviewing the information.”  For what it’s worth, the FAA approved July’s launch after reviewing Blue Origin’s measures to ensure the safety of the uninvolved public, in accordance with the regulations currently governing private human spaceflight.

Abrams, who went on to another job in the tech industry after leaving Blue Origin, said she was going public despite the fact that she signed non-disclosure and non-disparagement agreements with the company. “I’ve gotten far enough away from it that I’m not afraid enough to let them silence me anymore,” she told CBS.

The byline for the 2,200-word essay says the current and former employees include representatives of the teams for New Shepard as well as for Blue Origin’s orbital-class New Glenn rocket, the engine development group, advanced development programs, test and flight operations, and human resources. Among the allegations:

Today’s allegations come at a challenging time for Blue Origin: It’s suing the federal government after being passed over in a competition for lunar lander contracts from NASA — a competition that Elon Musk’s SpaceX won. It’s dealing with schedule delays in the production of its BE-4 rocket engine and New Glenn rocket. And it’s going through a series of departures of key employees.

Update for 11:05 a.m. PT Sept. 30: In a Twitter message exchange with GeekWire, Abrams told her side of the story about her dismissal:

“I never received any warnings, verbal or written, from management regarding issues involving federal export control regulations. When I was contacted by an internal software engineer about potential opportunities for violations within the third-party software SocialChorus, I immediately raised the concern with the Information Security Department and escalated it to senior management. I then initiated a root-cause investigation supported by safety and mission assurance.

“As a communications professional, and part of the non-technical staff, I was not responsible for certifying or approving any compliance of any third-party software architecture. And to date, as far I’m aware, the software in question is still used by Blue Origin, and Amazon.”

In a follow-up message, Abrams added, “They certainly paid me a lot of money for being fired for cause.”