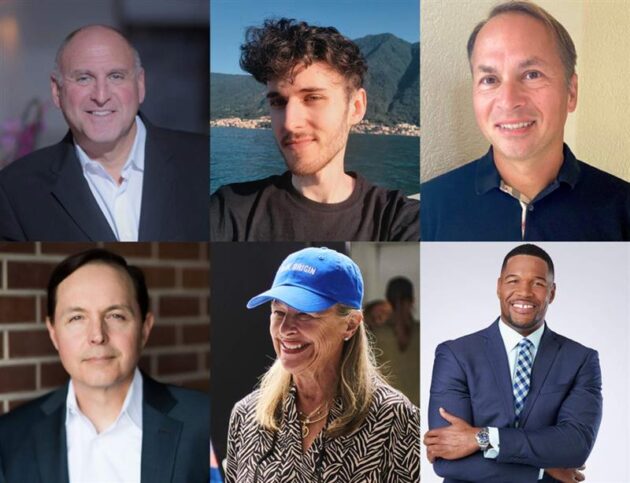 Jeff Bezos’ Blue Origin space venture is planning to fly six suborbital space travelers next month, which would mark a first for the company’s New Shepard spaceship. And that’s far from the only first.

If the NS-19 mission proceeds as planned on Dec. 9, the people on board will include the first father-and-son team in space, the first professional U.S. journalist in space, and the first daughter of an astronaut to go into space herself.

To cap it all off, the astronaut’s daughter is Laura Shepard Churchley — whose father, Alan Shepard, was the first American in space in 1961, providing the inspiration for New Shepard’s name.

“It’s kind of fun for me to say an original Shepard will fly on the New Shepard,” Churchley, 74, said in a video clip released by Blue Origin. “I’m really excited to be going on a Blue Origin flight. I’m very proud of my father’s legacy.”

“An original Shepard will fly on the New Shepard.” Laura Shepard Churchley, the daughter of the first American in space, will embark on her own journey to space on board #NewShepard on December 9. pic.twitter.com/vQfzTKo1ze

The journalist is Michael Strahan, who’s a co-anchor for ABC’s “Good Morning America” as well as the host of the “$100,000 Pyramid” game show, a former football star and current TV football analyst.

“Blue Origin, they approached me and they asked if I wanted to be a crew member. And without hesitation, I said yes,” Strahan said on this morning’s GMA show. Strahan will follow in the footsteps of the first journalist in space, Japan’s Toyohiro Akiyama, who went to Russia’s Mir space station in 1990.

Churchley and Strahan will be flying as Blue Origin’s guests. In a news release, Blue Origin said that Strahan would be paid a stipend as a crew member, and that the stipend would be donated to the Boys & Girls Clubs of America.

The father and son are Lane Bess, a longtime tech executive who’s the founder of a venture capital firm called Bess Ventures, and his son Cameron Bess.

They won’t be the first parent and child to fly in space. That distinction belongs to the late NASA astronaut Owen Garriott, who put in a stint on the Skylab space station in 1973 and flew a shuttle mission in 1983; and Richard Garriott, a video-game creator who paid a multimillion-dollar fare to go to the International Space Station in 2008. But they will be the first parent-and-child duo to fly on the same space mission, albeit suborbital rather than orbital.

Rounding out the sextet are Evan Dick, who’s an engineer, investor and managing member of New Jersey-based Dick Holdings LLC; and Dylan Taylor, who is the chairman and CEO of Voyager Space and the founder of a nonprofit group called Space for Humanity.

In a blog item announcing his participation in the mission, Taylor announced “a set of gifts that I would ask all other commercial astronauts to consider.”

“I call it buy one, give one. … It is simple, donate to worthy causes here on Earth the equivalent of the ticket price for the spaceflight,” he wrote. Taylor said his chosen beneficiaries will include Space for Humanity as well as AstroAccess, Edesia Nutrition, the Patti Grace Smith Fellowship and the Brooke Owens Fellowship.

Taylor, Dick and the Besses are paying undisclosed fares for their space trip.

It hardly seems real, but the journey to my dream of spaceflight begins today. Thrilled to announce that I will be joining @blueorigin #NewShepard Mission NS-19 on December 9th! Read more here https://t.co/HImmVYH8Wq pic.twitter.com/P6bKXNRpk9

This will be the 19th New Shepard flight since 2015, including 16 uncrewed missions.

The NS-19 crew will head out to Blue Origin’s West Texas launch complex a few days in advance of the Dec. 9 flight, and board the New Shepard spacecraft for a suborbital trip that will give them a few minutes of weightlessness and an astronaut’s-eye view of the curving Earth beneath a black sky. The autonomously piloted trip should last about 10 minutes, from liftoff to the crew capsule’s parachute-aided landing.

The New Shepard booster is designed to land itself separately on a pad not far from where it’ll be launched.

In addition to the passengers, Blue Origin will fly a postcard from each astronaut on behalf of the Club for the Future, the company’s nonprofit educational foundation. The club’s “Postcards to Space” program has sent thousands of messages from students to space and back on New Shepard.

Next month’s flight is likely to close out a banner year for commercial human spaceflight. In addition to Blue Origin’s suborbital missions, Virgin Galactic sent its billionaire founder, Richard Branson, on a suborbital test flight of its SpaceShipTwo Unity rocket plane in July. And in September, SpaceX put a billionaire-backed crew into orbit for the philanthropic Inspiration4 mission.