Blue Origin plans next space trip on Oct. 12. Two fliers are named, but not William Shatner.

Blue Origin’s first suborbital space crew does a photo op in front of the New Shepard rocket booster that lifted them skyward in July. (GeekWire.. 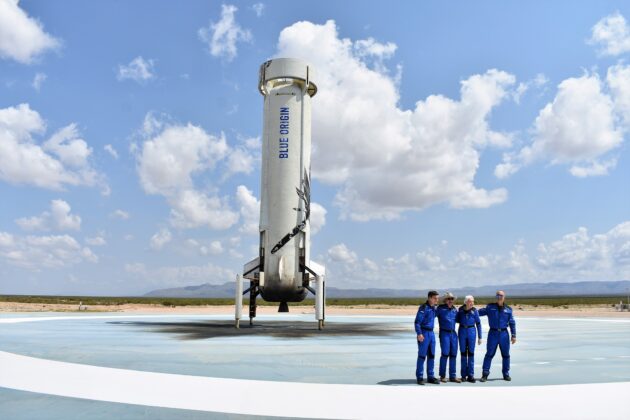 Jeff Bezos’ Blue Origin space venture says two successful tech entrepreneurs will be part of the lineup for its next suborbital trip on Oct. 12 — but for now, it’s keeping mum on reports that Star Trek captain William Shatner will also fly.

The first two people on the flight manifest are Planet Labs co-founder Chris Boshuizen and Glen de Vries, the co-founder of Medidata Solutions. De Vries is now the vice chair of life sciences and healthcare at Dassault Systèmes, which acquired Medidata, the world’s most used clinical research platform, in 2019.

Blue Origin said they’ll be joined by two other fliers whose names will be announced “in the coming days.”

The company didn’t disclose how much any of the customers will be paying for their trips — and didn’t address last week’s report by the TMZ celebrity news outlet that the fliers would include Shatner, who played Captain James T. Kirk on the original “Star Trek” series and in a string of movies that followed.

Next month’s suborbital launch from Blue Origin’s West Texas spaceport would follow up on the company’s first crewed spaceflight in July. The riders for that flight included Bezos himself, as well as his brother, Mark; aviation pioneer Wally Funk, who at the age of 82 became the world’s oldest person to go into space; and Dutch student Oliver Daemen, who became the world’s youngest spaceflier at 18.

If Shatner flies next month at the age of 90, he would set a new record as the oldest person to fly in space.

The next flight would trace the same trajectory as Blue Origin’s 17 previous launches (which include uncrewed flights). The New Shepard spaceship would blast off to send its fliers beyond the 100-kilometer (62-mile) mark, giving them a few minutes of weightlessness and a view of the curving Earth beneath the black sky of space. The parachute-equipped crew capsule would then float back down to the West Texas desert while the booster makes an autonomous touchdown on a landing pad.

The whole trip would take about 10 minutes. That’s much shorter than the three-day orbital trip that the Inspiration4 mission’s four-person crew took this month in a SpaceX Dragon capsule.

In today’s news release, Boshuizen and de Vries said they were thrilled to go on a suborbital space journey.

“This is a fulfillment of my greatest childhood dream,” Boshuizen said. “More importantly, though, I see this flight as an opportunity to inspire students to pursue careers in STEM and catalyze the next generation of space explorers. After all, our future of life in space is in their very capable hands.”

Boshuizen co-founded Planet in 2010 and served as its chief technology officer for five years. The company now operates three constellations comprising more than 150 Earth observation satellites in low Earth orbit. He has also served as a space mission architect at NASA’s Ames Research Center, where he co-invented the NASA Phonesat, and played leading roles at Singularity University and the Space Generation Advisory Council.

In an interview with The Age, Boshuizen played up the fact that he was born in Australia and has never taken up U.S. citizenship. “I’ve been stubborn about it,” he said. “I’m still on a work visa here in the U.S. after 14 years.” Other Australian natives have become U.S. citizens and NASA astronauts, but Boshuizen told The Age that he’d be “the first Aussie Aussie going up.” 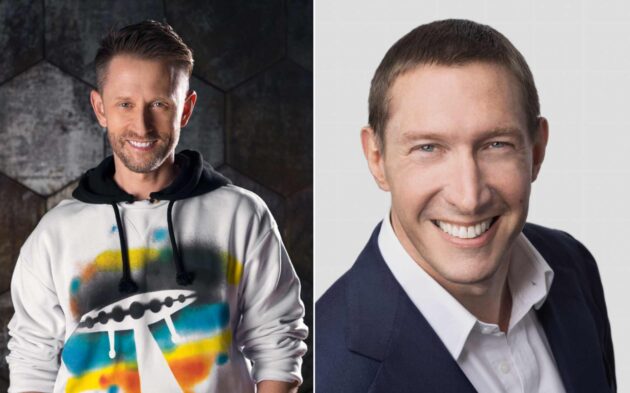 In addition to his roles as a Medidata co-founder and Dassault executive, de Vries is a trustee of Carnegie Mellon University, the author of a book about precision medicine titled “The Patient Equation,” and an instrument-rated private pilot.

“I’ve spent my entire career working to extend people’s lives. However, with limited materials and energy on Earth, extending our reach into space can help humanity continue to thrive. Furthermore, astronauts can experience the ‘overview effect,’ gaining a new perspective on how fragile and precious our planet, those resources and our civilization are,” de Vries said.

“Playing a part in advancing the space industry, and one day making those resources and that understanding available to everyone, is an incredible opportunity,” he said.

In an email, Blue Origin spokesperson Sara Blask told GeekWire that both men took part in an auction that was conducted for one of the seats on July’s flight. The winner of that auction bid $28 million, but decided to pass up on the first flight. That opened up a seat for Daemen, who is the son of a Dutch investment firm’s CEO and also put in a bid.

The high bidder hasn’t been identified, but Blask said Blue Origin “will be announcing details on the auction winner soon.”

Like July’s flight, next month’s mission will be live-streamed via Blue Origin’s website, with liftoff tentatively set for 8:30 a.m. CT (6:30 a.m. PT) Oct. 12. And following up on past precedent, Blue Origin will pack thousands of postcards in the crew capsule for the “Postcards to Space” STEM program that’s offered by the Club for the Future, the company’s educational nonprofit organization.